A youth who had begun to read geometry with Euclid of Alexandria, mathematician, teacher at the Alexandrian Library under the reign of Ptolemy I, when he had learnt the first proposition, inquired, “What do I get by learning these things?” So Euclid called a slave and said “Give him three-pence, since he must make a gain out of what he learns. There is no other Royal path which leads to geometry”. (Stobaeus, Extracts). It is not known if the anecdote is true but it is significant the fact that Maths in Ancient Greece was considered far from any practical applications.

It is common knowledge that geometry was born in Egypt for field measurement. By idealizing the geometric shapes, the Greeks took the discipline to a breakthrough, making it pure science. Thanks to Archimedes, Maths was applied also to physics and engineering; nevertheless, we will need to wait to see its large-scale application, i.e. to of a range of other activities such as economics, commerce, architecture, the military field, and measurement devices – a revolution which took place in Italy in the XIII century. 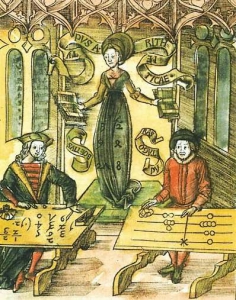 With the age of Italian city-states, the society changed profoundly, and with it the request of culture, both in terms of quality and quantity. A sound mathematical competence became mandatory for a growing number of new professions. Accounting skills were requested not only to an accountant but also to handicraftsmen, shopkeepers, architects, as well as the artists of the Humanism and Renaissance. To this latter group belonged Leonardo da Vinci, Raphael, and Michelangelo, just to mention a few.

The reference point of all the abachistic tradition is Leonardo da Pisa, also known as Fibonacci, born in Pisa in 1170. Fibonacci is perhaps best known for a simple series of numbers, introduced in Liber abaci (1202) and later named the “Fibonacci numbers” in his honour. The Liber abaci become the “Bible” of the abachists, introducing the written notation for the zero. Luca Pacioli (ca. 1445 – 1517) wrote the «Summa de arithmetica, geometria, proportioni et proportionalita» (Venice, 1494), a textbook for use in the abachist schools in Northern Italy. It was a synthesis of the mathematical knowledge of the time and contained the first printed work on algebra written in vernacular language.

Gerolamo Cardano (1501-1576), professor at the University of Bologna, Pavia, and Milano, authored the «Practica arithmetice et mensurandi singularis», written Latin and published in the 1539. Christoph Kalu (1537-1612) was a distinguished mathematician of the Compagnia di Gesù (Society of Jesus) and the scientific advisor of Pope Gregory XIII for the calendar reform. He worked with the most important scientists of the time, such as Galileo Galilei, Tycho Brahe, Johannes Kepler, Francesco Maurolico, Federico Commandino. He is the author of the «Aritmetica pratica», which he wrote in Latin in 1583 and in vernacular in 1586.

The abachist schools represent a cultural change of the mathematical fruition. For the first time, Maths entered extensively in the professional activity. How much Maths was needed by an artilleryman? A captain? An agronomist, an architect, a painter? And, today, how many tools that may help to understand and use the technology do we need now? 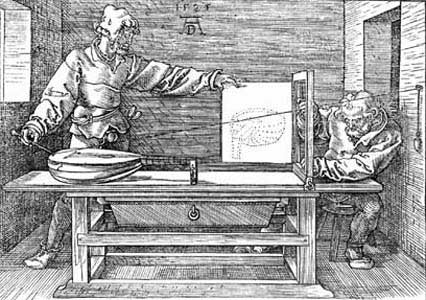